A Beginners Guide To Fireworks 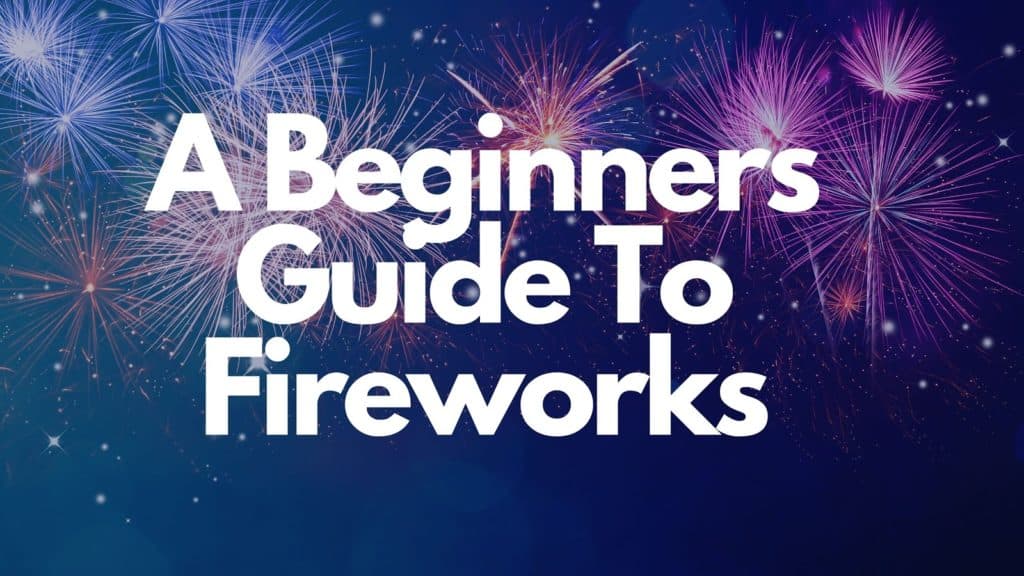 There are various types of fireworks and products that you can use for your back garden light show, such as aerials, ground fireworks, novelty fireworks, and boxes of fireworks. What category you select depends on who you want to impress and what kind of show you want to put on! Let’s take a look at some of the different kinds of fireworks you could buy in 2020! 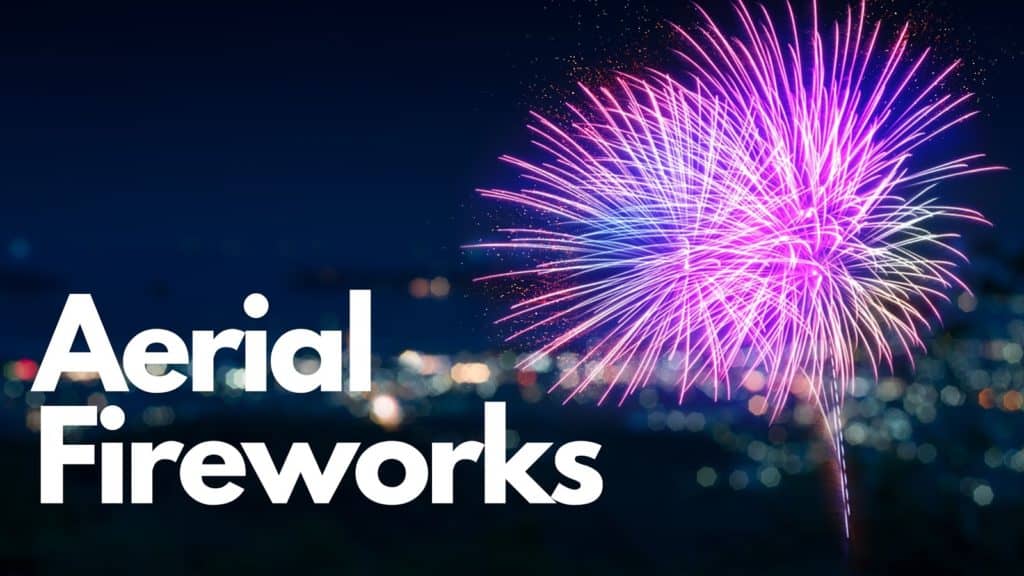 These kinds of fireworks are large and colourful fireworks that elevate effects from a single mortar tube into the sky or fused together by several mortar tubes.

Finale Racks are multi-shot aerial fireworks that can have a variety of mortar tubes inside. Usually, there are nine shots, and each one of them varies in colour and effect. They are thought to be the best part of the show because they are the largest and the loudest fireworks that finish the show with a bang. They will display a wide range of colours and effects to really make your neighbours impressed.

Often known as cakes, they are pre-loaded into tubes and are the largest multi-shot aerial fireworks available in the UK. These can be big and noisy depending on the size of the mortars in each tunnel. Five hundred gramme repeaters are very simple for customers to use because there is a single fuse to the light that is connected to all of the tubes of dynamite!

These multi-shot aerial fireworks are pre-loaded into tubes. They are smaller than 500-gramme repeaters, but they are unparalleled with spectacular light shows on offer.

Keep the launch tubes mounted to the foundation to help hold the tube level on the deck. Buyers have to load the tubes with the shells individually. When they ignite in the sky, they are rich in colour and have mesmerising effects.

Rockets and missiles can be either attached to a fin tube or to a stick that produces a variety of effects, such as whistles, bangs, crackles and stars. Consumers can place rockets and missiles in the ground or on platforms and light the fuse individually. Good fact: rockets are in fact one of the most common and one of the oldest forms of fireworks.

These types of spinners are lit on hard, smooth surfaces. Once lit, they spin fast enough to fly into the air producing a shower of colourful flashes underneath.

RC’s are in tubes, usually made of cardboard, which shoots out comets, stars and a variety of other effects. They are ejecting one or more exploding shells with superb colours. These can also be large in size to achieve greater results. 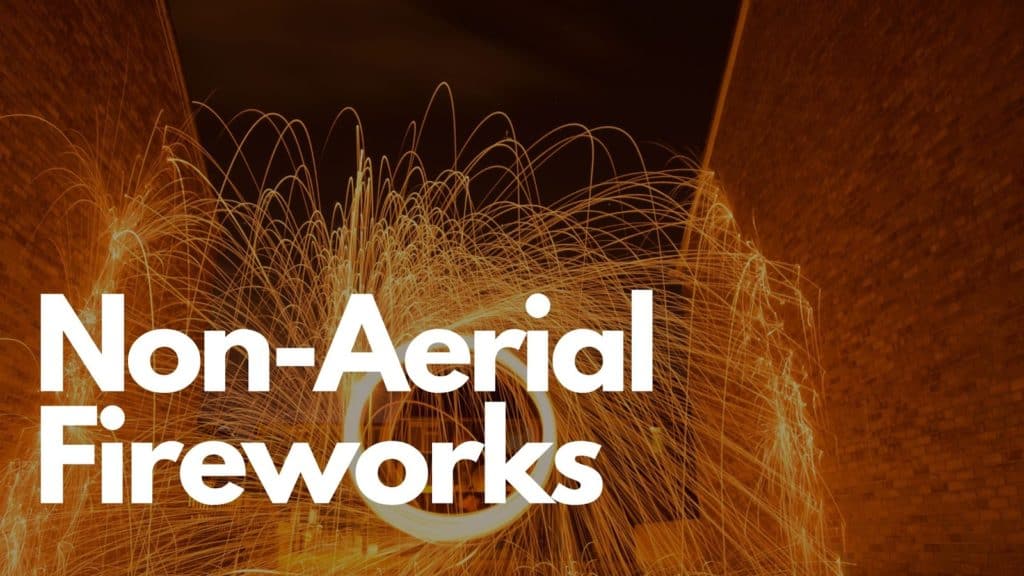 What Are Ground-Based Fireworks?

Fountains are the most common non-aerial fireworks. They come in a wide variety of shapes and sizes. These don’t shoot in the air and usually don’t make loud bangs like aerial fireworks. When the fuse is lit, the fountains emit a shower of colourful sparks and can trigger whistling or crackling noises. Most of them last a long time, and different components create a variety of colours and effects.

Smoke balls are coloured with a fuse from the tip. When lit, the smoke emits the same colour as the ball, it’s contained in.

Firecrackers have to be lit individually and are small in size, but they generate a loud voice. Firecrackers can also come in blocks, which are packets of firecrackers fused together.

Jumping jacks are similar to firecrackers, but when lit, jumping jacks jump off the ground. Each of them jumps, pops, and can emit colours.

Ground spinners are products which, when lit, spin on the ground and produce flashes. They also change colours and give off a decent amount of light when swirling around.

Wheels are often in a round shape card or plastic disc. Attached to the disc are a variety of rockets, like thrusters, which cause the disc to spin around producing flames or sparks when lit. 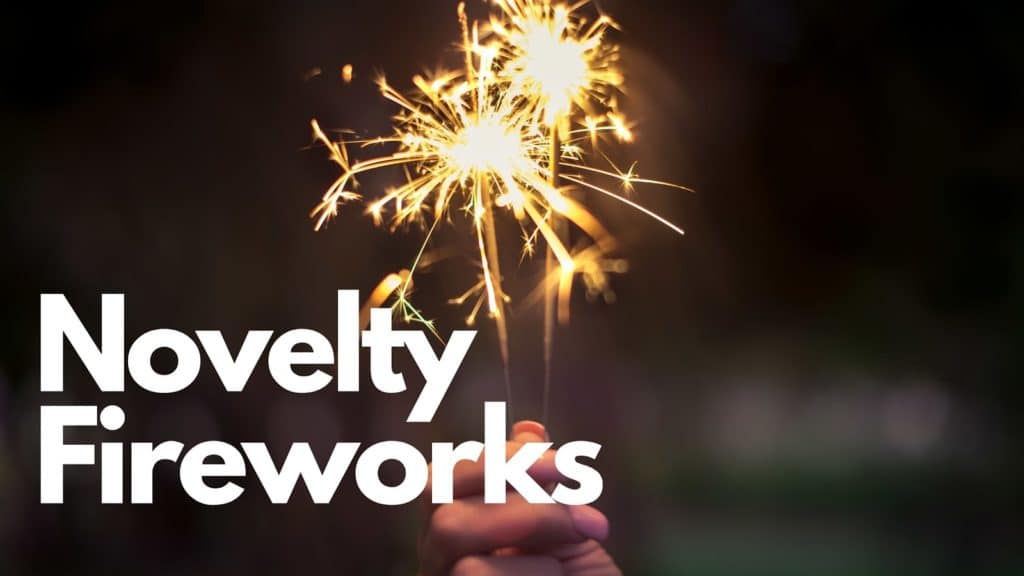 Sparklers are wires with a pyrotechnic material that can be placed in the ground, or you can hold them. They vary in size, and some can be put on top of birthday cakes. The Sparklers are known to be the hallmark of the fourth of July.

Party poppers vary in size but are mostly used for celebrations. When you pull the string of a party popper, they make a loud pop noise and release confetti into the air.

The lanterns are similar to the little hot air balloons, and when you light them, the flame will make the lantern float in the sky. Most of the time, lanterns are used in festivals around the world.

Now that you know the different kinds of fireworks that are available, you can be sure that you’re going to leave an unforgettable impression on your family, your neighbours, and your neighbour down the road. If you want more of a mixture of aerial fireworks or land fireworks, there are numerous kinds available that have the best selling items in the box. Click here to take a look at our online fireworks store. 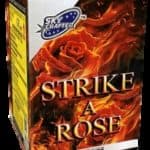 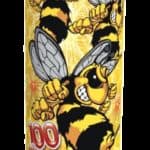 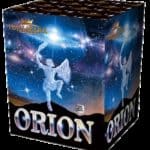 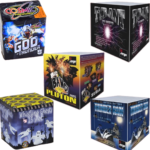 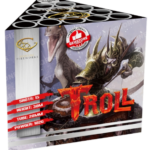 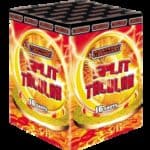 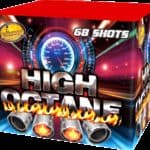 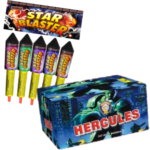 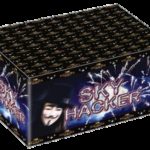 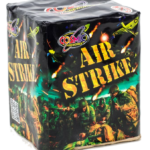